Pair of earrings "Florence - The Old Bridge", in galvanized/drilled brass. 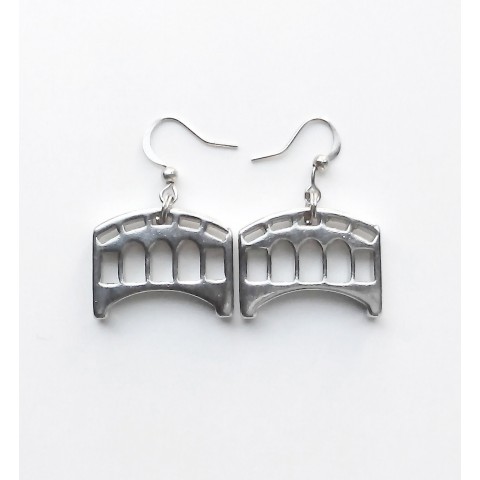 Pair of earrings My Travels dedicated to it evokes three of the eight sides that form (h. 2.00 cm) .

Small pendant inspired by one of the most famous bridges in the world, born as a result of numerous reconstructions of ancient bridges swept away by the floods of the Arno.
The base current of the bridge seems to be due at the end of the twelfth century and its reconstruction in 1345 by 3 passes, probably, by Taddeo Gaddi.
From the fifteenth century it became the seat of butchers and meat market , which, over time, have followed the goldsmiths and jewelers.
The butchers, through the construction of the workshops and their little rooms jutting made without a specific order, conferred the bridge its characteristic physiognomy .
This was then made more complete by the intervention of Giorgio Vasari in the sixteenth century with the construction of the overlying Vasari Corridor aims to connect the Palazzo Vecchio with the private residence of the Medici Pitti Palace.

Its symbolic meaning is very strong: in addition to its unique shape , the Ponte Vecchio is the connection point between the administration and the ducal residence .
In front of it also stopped the Nazi fury: it was the only bridge in Florence that was not destroyed by the Germans in 1944 during the Second World War and was the connection point between north and south city in the days of the Liberation.

My Travels Pair of earrings are inspired by the central crossing the Ponte Vecchio , with its characteristic rooftop terrace with three arches and the 3 windows of the Vasari Corridor.