It is awild, obscure and primitive scent, based upon the very precious essence of Oud, which well combines with complex and mysterious personalities. 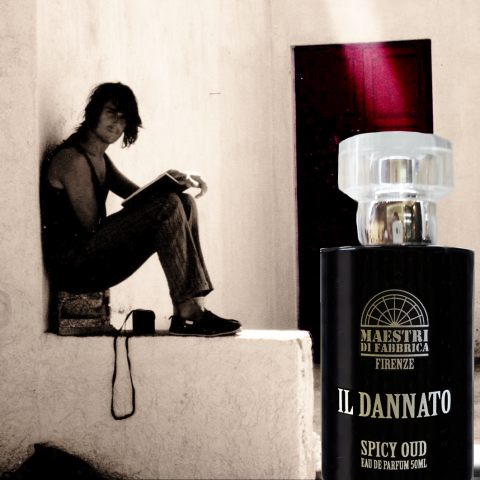 It is a wild, obscure and primitive scent which well combines with complex and mysterious personalities. It is based upon the very precious essence of Oud, it is characterized by musky and animal-like nuances, mixed together with a smell of leather, of roots and of earth, together with sweet notes such as cacao, caramel and other oriental indescribable aromas.

A scent which includes the overwhelming strength of nature – we could define it as “supernatural” – reminding an old and mysterious past. It expresses sexuality, passion, ecstasy and love. These features are even more emphasized by the strong, fiery and exotic aroma of black pepper.

It is dedicated to the legendary character of the “Damned”, typical of the Tuscan countryside. The Damned represented, in people’s unconscious, the soul of the one who, during his life, sullied his reputation with reproachable behaviors and, for this reason, was buried outside the consecrated grounds.

Indecent expressions and supernatural phenomena were associated to the destiny of that soul. It represented the collective fear which made a “community”: the Damned was that unquestionable mysterious aspect of the place which was necessary in order to pluck up one’s courage staying close, developing a passion and get warm each other.

The fragrances it is composed of have stimulating, revitalizing, balm-like, antioxidant, cleansing and energizing properties.